Five girls, two theme parks, one day. It sounds impossible — but it was easily one of my favorite days of the summer, and it was made even more special as a celebration for a friend’s upcoming wedding.

If you’re a bride that values experiences and quality time, a theme park is an obvious choice for your bachelorette weekend.

I can distinctly remember when my love affair with Harry Potter’s world began. My godmother sent me the first Harry Potter book as a Christmas gift when I was 10 years old. Though I didn’t fully finish the second book before the next Christmas (that Basilisk totally frightened me), within a year I gave it another go and was fully hooked on the books, ultimately making my room into a shrine to all things Harry Potter until I was at least 16. I had board games and blankets, trivia cards and posters. I bought almost every soundtrack and read every behind-the-scenes interview I could, and, depending on the summer, eagerly counted down for the next movie or book. I thought nothing could top the way the movies brought the books to life, but then I turned the corner into Diagon Alley.

I audibly gasped. My mouth almost hit the ground. I think I clasped my hands to my heart. The details, the colors, the sounds — it was everything I could have ever wanted, and suddenly I was 10 years old again.

This was the sort of bachelorette experience that truly excited everyone in the party. Read on to learn more about our time in the park, what our favorite activities were, plus some handy tips for theme park newbies like myself. 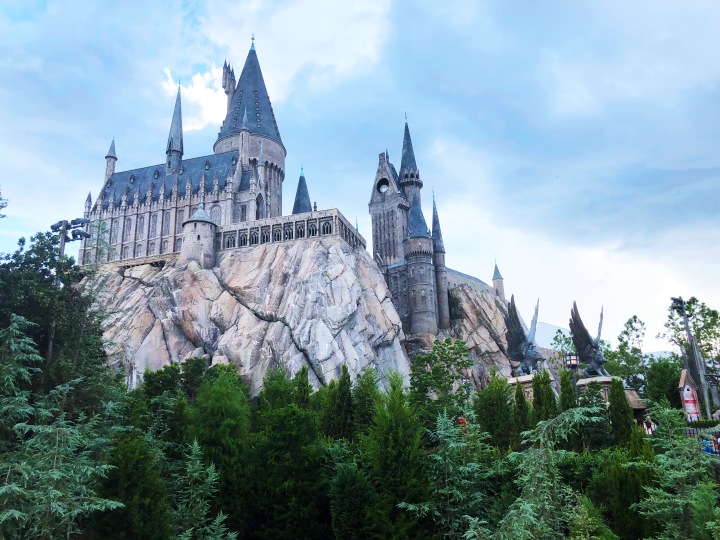 Have a Plan of Attack

The Wizarding World of Harry Potter isn’t just one park at Universal. Instead, it’s divided between Islands of Adventures and Universal Studios. Though it’ll certainly give you more time to admire every single detail and enjoy every ride, you don’t necessarily need a two-day park pass to see it all. But, anyone who wants to see both Diagon Alley and Hogsmeade — and get the full Harry Potter experience — needs a park hopper pass.

Because we wanted to maximize our long bachelorette weekend in Orlando, our group settled for a one-day park-to-park pass.

We agreed to begin the day in Universal Studios at Diagon Alley before taking the Hogwarts Express ride over to Islands of Adventure for Hogsmeade and Hogwarts. This was probably the best decision we could have made the entire weekend. Not only did we avoid the lines (most people tend to beeline toward Hogwarts), but we also stayed true to the books and explored the Wizarding World the way Harry did!

For more on our long weekend in Orlando (plus special champagne send-off!), check out my Orlando bachelorette guide. 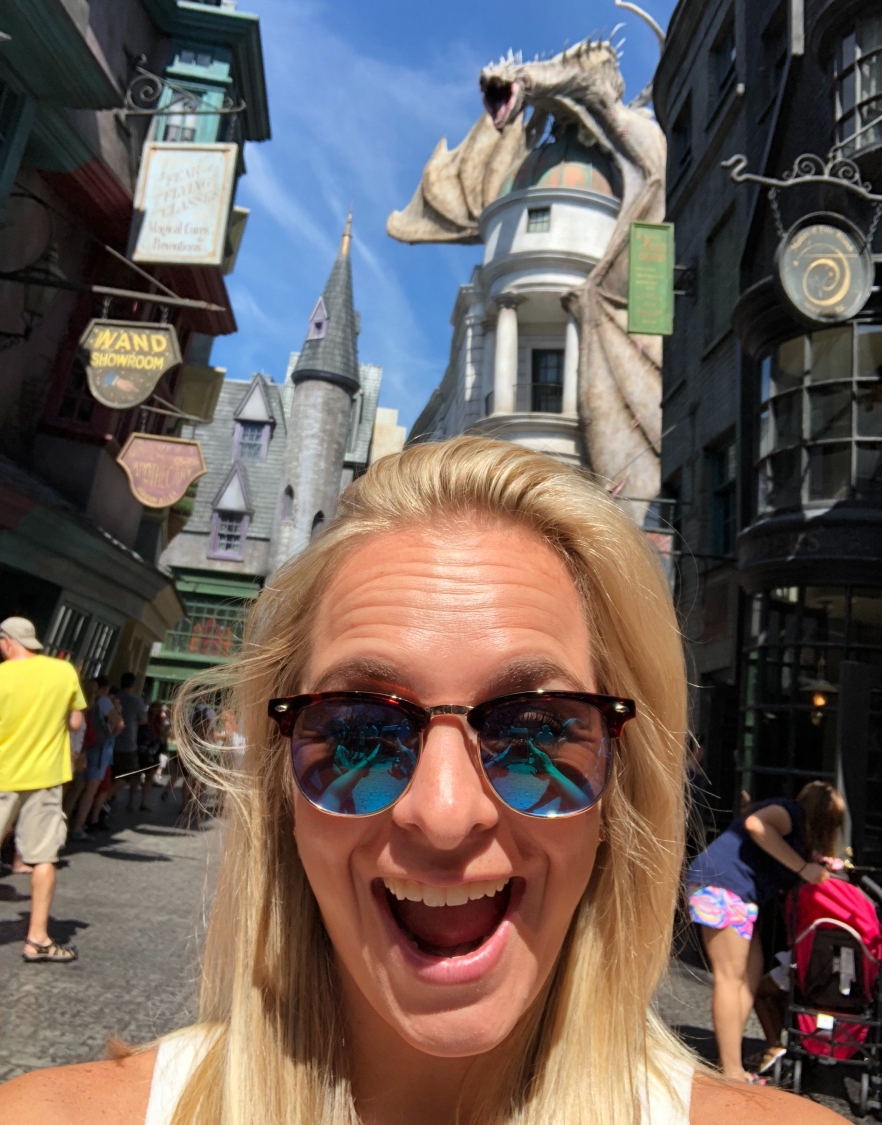 I’ve been wanting to visit Harry Potter World since I was in high school, so when we turned the corner into Diagon Alley, I was honestly giddy with excitement. I audibly gasped. My mouth almost hit the ground. I think I clasped my hands to my heart. The details, the colors, the sounds — it was everything I could have ever wanted, and suddenly I was 10 years old again.

It’s Possible to Do It on a Budget

Weddings, bachelorettes and theme parks have one giant thing in common: They can get really expensive very quickly. With so many of us coming from all over the US for this bachelorette, it was pretty apparent even in the earliest planning stages that we would need to be really conscious about how much we’d want to send for this trip. 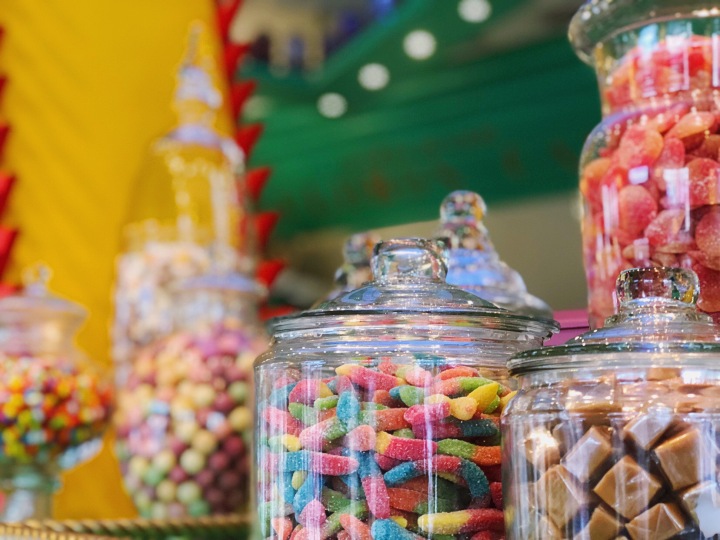 Here are three simple ways you can make your time in Universal’s the Wizarding World of Harry Potter as budget friendly as possible:

1) Bring waters and hydration tablets with you.
Food in theme parks can be so expensive, and, while I had no problem forking over the money for countless butterbeers, the price of Gilly Water at HP World nearly broke my heart. While I take full responsibility for buying the water bottle (I needed to know what it tasted like after all), I’m happy to report there’s nothing special about it — except the the $7 price tag (with tax). Don’t be like me. Instead, stay committed to the water bottles in your backpack — and keep your eyes peeled for *free* refilling stations throughout the park.

2) Hold out for the Great Feast.
This was perhaps the best tip I received from my theme park loving friend back home: If you have a group of four or more, order the Great Feast at The Three Broomsticks in Hogsmeade. For $60 (roughly $12 a piece), the five of us enjoyed a huge salad, smoked chicken, ribs, corn on the cob, roasted vegetables, and roasted potatoes. Drinks aren’t included with the meal, but they’re not overly priced at this location either.

3) Make it count.
If you’re anything like me, you want to get your money’s worth, and get our money’s worth we did. We girls got to the park as early as possible — and stayed until the very last second. We rode each of the Harry Potter rollercoasters twice and shamelessly drank as many frozen butter beers as we could. We took photos and squealed at the details. We watched the shows and smiled as a little girl found her wand. We walked into every shop and asked employees what their favorite part of the park was. It really was one of the most magical days of the summer. 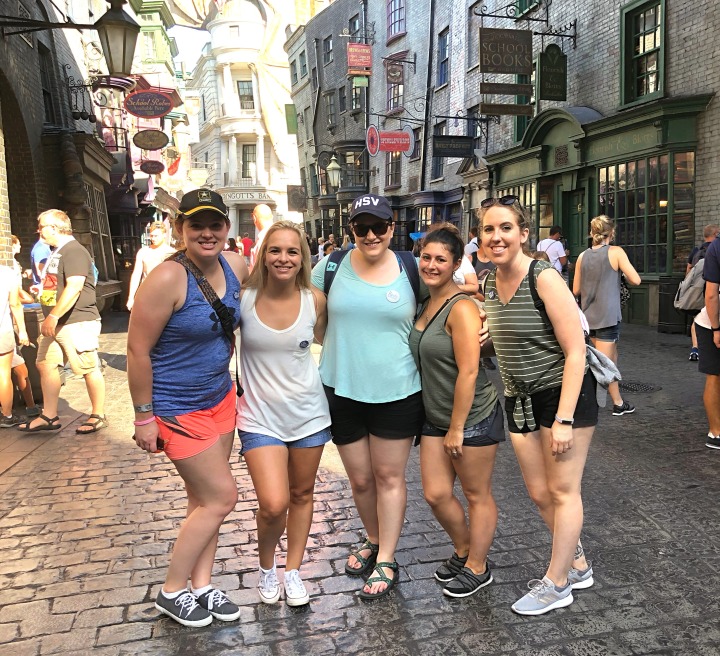 Was this helpful, or did I forget to mention an important detail? What are your top tips for Harry Potter World? Leave me a note below and tell me what you think!

Leave a Reply to The Traveling Gingerbread Cancel reply